Charles Fey's invention caused stir in the gambling world and in the sphere of manufacturing, as well. The first slot machine invention called Liberty Bell and the evolution of slots further on took place mainly due to the development of capitalistic era in the USA.

However, new era brought the new issues to deal with, especially in forbidden realm of gambling.

After the Fey's invention, the company Mills Novelty continued slots manufacturing prior having renamed the Liberty Bell into Operator Bell. The slots featured the well-known in the modern gambling fruit symbols that nowadays ere familiar to every gambler. Thus, the history of Liberty Bell was changed to start a new one. 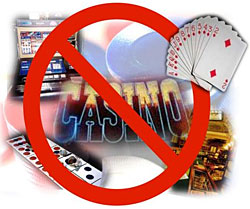 However, almost from the very beginning of the anti-gambling laws wave that was provoked by the slots machine appearance and manufacturing, the anti-gaming slot machines reaction was set. The anti-gambling sentiments were constantly growing. To avoid the problems with the laws, Fey resorted to different commercial tricks. He had to be clever in order to avoid the banns. He managed to design the so called vending machine. In fact it would cause the raise of anti-gambling laws against vending machines later. It happened due to the fact that the gamers very often confused two different machines: vending and slots. The police made profits on the situation with participation of press. Thus, in order to guise the slots nature, the manufacturers resorted to pulling the gums nearly in each slot machine. It is interesting to know that the BAR symbol originates from these very attempts to market gums.

The anti-gambling movement that was in addition piggybacked on the movement for abstention in the USA turned out to be the real trouble for Fey. Slots were proclaimed illegal in San Francisco and later on in Nevada, as well in 1910. It was surprising that by the year 1911 all slot machines were already prohibited by the anti-gambling laws of the California State. In the 30s, by the way, to be anti-gambling oriented became politically popular, especially anti-slots oriented.

The most famous New York Mayor picture had the image of the slots machines drowning in the sea. In fact, many of these machines were not even the slots. They had nothing to do with the gambling and were no more than ordinary vending mechanisms. During the actions a lot of vending machines were simply confiscated from the industry. In the slots history it was a really tragic event.