It is interesting to know that the story called Reel Story is connected with the reel type slots and besides is rather informative. 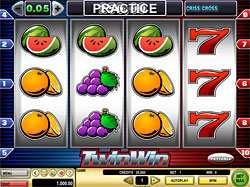 In prior times the reels of the slots were mechanical and the size of the possible jackpot was greatly limited to the number of combinations made by the reel s number and the number of images displayed on them. It is widely accepted that the first slots were invented by Charles Fey and they consisted with 3 reels, however, they were a bit unprofitable in comparison with modern slots.

The only problem with the 3 reel slots was the fact that the combination number could be cubic only. The max theoretical repayment assuming the 100 percent return to the gamer would probably be 10 hundred combinations that still limited the possibilities of jackpot, as well as the possible outcomes number.

It was the first slot machine that had 3 reels with images. Such machines were better known as the bell machines. As far as they had only 3 reels having ten images on each of them, there were only 1 000 possible combinations that were possible to make. The total payment for the whole winning combinations could be 7 50 coins only. It is interesting to know that such slots could give the casino profit of 25 percent only. In addition, it is known from the slots history that this gave only 25 percent of profits. Moreover, the table of prizes listed of the drinks, when in reality it was coins that machine paid out.

In the flow of the evolution of slots additional reels were added.

Traditionally, like any other star gaming USA slots evolved first into the 5 reel machines. 5 reel machines debuted first in traditional land based houses. The popularity was phenomenal and made slots popular very fast. Some gamers consider 5 reel slots harder to win. However, since all modern slots use RNG, it is rather doubtful. The majority of 5 reels can pay out about 95 per cent or even more to the gamer.

It is known from the slots history that in 1909 another American inventor named Herbert Mill from Chicago managed to add ten additional symbols to each of the reels and in such a way made the slots rather space saving and mobile. It was named after the inventor - Mill's Liberty Bell. The popularity was so immense that the houses started the first tournaments similar to the modern.