Charles Fey had no idea how important his brainchild would be for the further gambling generations! From that very moment different manufacturers were trying to improve the gambling machine, and they were successful. The latest slots modification is called video slots. 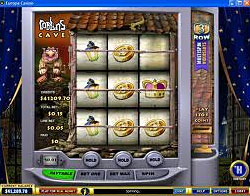 Video slots are considered to be the recent innovation in the sphere of gambling. It is deprived completely of the moving parts; instead the graphical representation animated simulation is introduced on the screen. As far as the gamer simply plays the kind of the computer game, the video slots manufacturers can be able to present more interactive elements like, for instance, advanced slot bonus rounds, and advanced video animation.

The main significance is that there are thousands of various outcomes, some even with up to 50 winning lines and additional special bonuses available. It produces more interesting and profitable winning experience.

In addition, due to the absence of the mechanical elements in the slots design, the majority of video slots display 5 reels rather than 3. Indeed, such features give a lot of expanded possibilities. Thus, the machine can easily have up to fifty symbols or even more images on the slot machine reels, giving odds of about 300 million to one against. It is more than enough for the huge jackpot. So, there are so many various combinations given only by 5 reels that the slots manufacturers even do not need resort to payout symbols weighting, though some of them still resort to! Instead, higher paid images will appear only twice or once on each of the reels in time when the most common images, earning much more often payout would probably appear many times.

Moreover, video slots simply encourage the gamer to play in multiple lines rather than take the middle of the 3 images on each of the reels. The line can run from left top to bottom right or any other feature specified by the manufacturer. The difference for the player is mostly the fact that the more lines the player plays the more chances to be paid on the given spin. However, the player must bet more, as well.

In order to avoid the feeling of the wasting money, the video slots manufacturers resort to bonus games offering that will be able to return the money wasted for gambling many times. In such a way the player is always encouraged to keep gaming to reach the offered bonuses. Even if the player is losing, the bonus games will sure to allow him returning back his money.