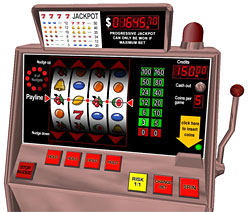 It is essential to say that there are a lot of slots types and slots machines configurations. However, all of them are working mostly according to the same principles: the player only should insert the coins and pull the lever.

However, the most widespread slots types of slots are considered to be:

Straight slots are the most common slots type. This type of slots accomplishes the winning payouts according to the particular schedules that are listed on the slot machine itself. For instance, one cherry symbol may repay two coins for every one inserted in, 2 cherry symbols may repay 5 coins, and 3 cherries ten coins. Depending on the repayment schedules there can be four types of straights slots:

This type of slots usually makes use of the used number of coins for the payout calculation.

This type of slots works traditionally like simple multiple slots with the only exception.

These slot machines make use of the played number of coins the player pays for activation of all possible pay lines.

Buy a Pay slots require the gamer to learn the rules of each particular slot machine very carefully. Thus, this kind of straight slots may vary from each machine.

The other type is called progressive slots. In these slots the winning is increased each time the coin is inserted. In the case of hitting jackpot with the total winning amount of money, the amount tends to get back to the starting point and grow again with each coin played, and so on and on. Such slots have the standard payout set listed on the slot machine.

Progressive slots have several types, as well. They particularly are:

Such kind of the of progressive slots is not linked to the network. Instead of some particular fixed jackpot, the stand-alone slots take the coin percentage played and then add them to the highest winning combination amount.

This very group of slots usually belongs to the casino and is operated by it with the help of linking machines together.

The wide area slots are called the progressive slots that can offer the real exchange jackpots. It is interesting that such slots may be connected from different areas, even from unrelated gambling houses run by different companies.

It was the first slot machine that had 3 reels with images. Such machines were better known as the bell machines. As far as they had only 3 reels having ten images on each of them, there were only 1 000 possible combinations that were possible to make.

It is known from the slots history that in 1909 another American inventor named Herbert Mill from Chicago managed to add ten additional symbols to each of the reels and in such a way made the slots rather space saving and mobile. Thus, seven reel slots were born.

From that very moment different manufacturers were trying to improve the gambling machine, and they were successful. The latest slots modification is called video slots.