Modern slots nowadays are quite different from those mechanical machines invented in prior century. The old slots usually made use of the tension and springs for the determination of the stop point of the reels. The new up-to-date electronic machines dispose much more sophisticated electronic methods of the spin outcome determination. 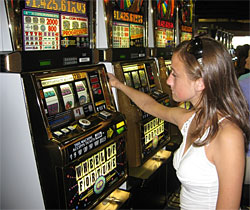 The heart of the slots

The heart of the slot machine is considered to be the random number generator. It is known to start working once the slots are turned on and is spitting out random numbers. Usually between 0 and several million numbers are spat out due to RNG at the rate from 300 to 500 numbers per second. RNG never stops generating and is not influenced by outer factors that's why the numbers are completely random.

It is essential to know that the way slots work offline and online is approximately the same. When the player places his bets and pushes the spin button, the slot machine is going to take the few next values from the RNG and pass over through the complicated computer program in order to determine the values the slot machine reels are going to have. Though the computation doesn't last long, the games are considered not to be preprogrammed to repay at any set time. It means that every single spin has the same equal chance for winnings.

In order to understand better the way slots work, it is possible to review the following case of 5 reel slots functioning.

Thus, after the player pushes the spin button, the slots will probably grab the next five numbers from the random number generator in order to store them in the memory. In such a way the slots use the first very number for the first reel determining, the position of the second for the second reel, etc.

For instance, let's take the number 3 486 421, and the computer division by 128. If divide the number by 128, the reminder of 81 emerges. As far as the machine has already set the values of where to stop for the reels for every value from 0 to 127, because these numbers are left after the division of RNG by 128. This very indicates that the machine should stop the reel at that very particular position.